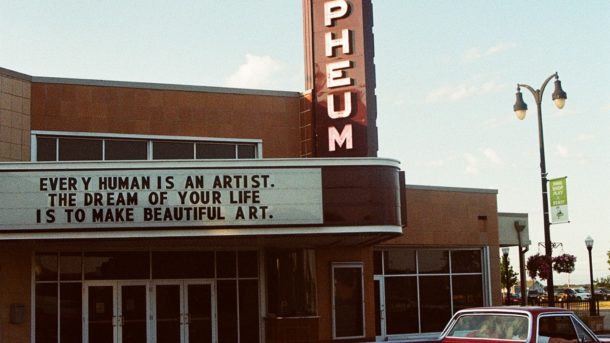 Making a movie is no small feat. From coming up with a compelling idea to finding the right talent , the process is long, arduous, and expensive. But the journey doesn’t end when the film is finished. The next step is getting it to the audiences who will watch it on the big screen. This is where film distribution comes in.

In this guide, we will take a closer look at the process of film distribution and answer questions like how movie theaters get movies, how you get distribution for a film, how much those distribution companies pay for films, and how they make back that money.

We’ll also give you tips on how to distribute a short film. By the time you’ve finished reading this guide, you’ll have a better understanding of the film’s journey from an idea to a work of art enjoyed by audiences, all thanks to the distributor.

How Do Movie Theaters Get Movies?

The process of getting a film from the filmmaker to the big screen is not a straightforward one. Different production companies and studios make movies, so how do they all wind up at theaters all over the world?

Here is an outline of how a film makes it to the big screen:

Anyone can come up with an amazing idea for a story. But it all starts with a good idea.

It isn’t enough for one filmmaker to believe in the story and hope it gets made into a movie. The next step is for that filmmaker to create an outline or a pitch deck. This is something that communicates the idea to others, even if you don’t have a full-fledged film to screen for them.

Step 3: Getting an Agent

An agent or manager can be crucial in getting the pitch or screenplay of a film to the right people, who will wind up being the source of the money it takes to fund all the moving parts that go into making a film.

After an investor distributes the film on a more intimate scale with studio executives and possible investors, someone with enough financial backing will decide to buy the rights to the screenplay itself. This investor could be one person with deep pockets or a whole professional studio.

Step 5: The Film is Created

This process can take years, depending on the type of film that is made and how easily it can be created. Not only that, but it is expensive, involving a producer, a cast, a screenwriter, set designers, costume and makeup designers, etc.

Step 6: The Film is Finished and Delivered to the Investor

Usually, if the investor backing the film is a studio, that studio then signs an agreement with a company whose sole function is distribution.

The distribution company is a sort of middleman between the makers of the movie and the theaters themselves. Once they’ve signed an agreement with the studio or investor who owns the rights to the film, they market it themselves using a few different methods, like deciding how many copies of the film to create.

Copies of the film, called “Prints”, are sent to theaters that have signed leases with the distribution company. These copies usually arrive just one or two days before the film is marketed and released

The distribution company will also handle the marketing and promotion of the film to generate buzz and attract audiences. This may include creating trailers, posters, and other promotional materials, as well as securing media coverage and partnerships with companies or organizations.

How to Get Distribution for a Film

So, you’ve made a film and now you’re wondering how to get it distributed. Here are a few tips:

Film festivals are a great way to get your film in front of industry professionals and potential distributors.

Get an agent or manager:

An agent or manager can be crucial in getting your film in front of the right people and securing distribution deals.

Reach out to distribution companies:

You can also reach out to distribution companies directly and submit your film for consideration.

If you’re unable to secure a distribution deal, you can also consider self-distributing your film. This may include releasing it online or in a limited number of theaters.

Do you have to pay for a film distribution company?

The short answer is yes, distributors are typically paid for their services. However, the amount they are paid can vary greatly depending on the film and the distribution deal that is struck.

One way that distributors are paid is through an upfront fee for the rights to distribute a film. This fee can vary widely depending on the budget and expectations for the film, as well as the reputation and track record of the distributor. For independent films, the upfront fee may be smaller, while for big-budget studio films, it can be in the millions.

Another way that distributors are paid is through a percentage of the film’s gross revenue. This includes box office sales, as well as revenue from DVD and streaming sales, merchandise, and other sources. This percentage can also vary greatly depending on the distribution deal that is struck.

It’s important to note that the amount a distributor is paid is also often tied to the success of the film. So if a film is a box office hit, the distributor will earn more money than if the film is a flop. This incentivizes distributors to put in the effort to market and promote the film to ensure its success.

In conclusion, film distribution is a crucial part of getting a film to the audiences who will watch it on the big screen. It’s a complex process that involves many different players, including filmmakers, investors, distribution companies, and movie theaters. By understanding this process, you’ll have a better appreciation of the film’s journey from an idea to a work of art enjoyed by audiences.

Are you ready to fund your next project? No matter what stage you’re in, we’re here to help. Check out our contests, you could win up to $10,000 for your short film!