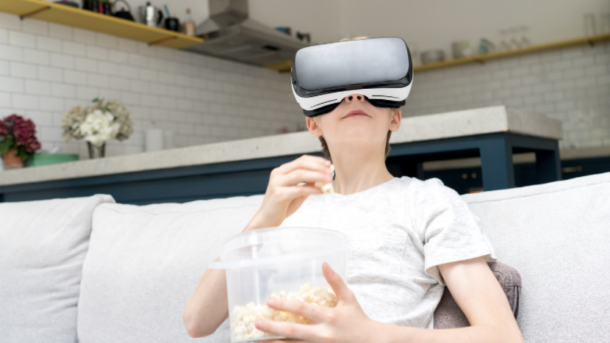 VR movies are nothing new. We’ve seen these kinds of films rolled out year after year since the early 1970s (even if the technology was pretty rudimentary for the time).

And while some VR films have really made their mark in Hollywood history (Avatar is a great example), many of them have missed the mark simply because your average moviegoer just wasn’t all that into the experience VR promoted.

The Rise of VR in the Indie Movie Making World

To the surprise of absolutely no one in the movie-making world, independent filmmakers are pushing the boundaries of what VR movies could be – what they should be – more than anyone on the major studio side of the fence.

Indie moviemakers have always been mavericks.

They’ve always looked for ways to leverage new technology to give them an edge and competitive advantage against movie studios with nearly bottomless budgets.

For a perfect example of this, have a look at the indie film WE’RE ALL GOING TO THE WORLD’S FAIR, a very well done Indie movie that revolves around a young girl and her coming-of-age story as she fights through loneliness, isolation, and anxiety.

It also happens to be one of the best indie horror films made since the BLAIR WITCH PROJECT!

A big part of the success is the way that the moviemakers are leveraging VR technology to make the movie experience more immersive than ever before.

Virtual cameras, for example, were a big part of the production of SOLO: A STAR WARS STORY.

These cameras “filmed” digital models of spacecraft, producing a much more natural camera experience that pulled audiences into the scene in a way that would have been literally impossible otherwise.

The newest remake of THE LION KING is another fantastic example of VR technology being used in filmmaking today.

VR cameras allowed the director (the rest of the camera crew) to have complete freedom of motion around the photorealistic lions in the movie that were shot on an empty soundstage.

The cameras provided a first-person POV for the director, allowing them to size up the shot with their own two eyes – through the VR system – rather than having to look through a computer monitor.

The end result was nothing short of spectacular, producing something much more natural and more alive than what the film would have been with more traditional animation approaches.

The most recent SXSW festival sometimes felt like “Ground Zero” for independent filmmakers looking to make the most of VR film technology. Because of the pandemic, the event had a lot of online events, and one of the best was the ability to spawn inside of a psychedelic version of South Congress Avenue in downtown Austin.

This was all put together by independent filmmakers embracing new and emerging tech like VR, including Maria Belen Poncio, Rosario Perazolo Masjoan, Sam Wolson, and Kiira Benzing.

Attendees were able to log into the VR world set up by SXSW programmer Blake Kammerdiener and were immediately dropped into the VR South Congress Ave. experience.

Different landmarks throughout Austin were perfectly represented in this abstract world, with different venues hosting different VR experiences. The Paramount Theater (designed to scale), for example, was home to live streams of films being presented and VR conversations with the filmmakers.

At The Contemporary in this VR world, visitors could jump into portals on the “second floor” and dive directly into more than 20+ different VR film projects created by the Virtual Cinema Program.

And that was just the tip of the iceberg!

Once again, it changed the film viewing process from something passive to something a lot more active – and changed the relationship that the “reviewer” had with the content, too.

Is VR Here to Stay?

It’s impossible to know for sure if a VR headset for watching movies is going to be mandatory in the future, the near future anyway.

But the odds are pretty good that it’s going to be closer and closer to our “normal” than it ever was before.

Virtual reality technology is pushing its way into every form of entertainment. We are seeing it in the videogame world, the movie-making world, and the sports entertainment world – and the experiences are better than ever before.

As the technology for shooting in VR becomes less expensive and the consumer demand for VR content skyrockets it wouldn’t surprise anyone that movies would really lean into this new medium.

The Future of VR Tech and the Movie Industry

For now, though, we have to be at least a little bit content with just seeing how independent filmmakers tinker and toy with this amazing technology.

Things are still very new and very fresh. VR is still in its infancy.

Even still, though, major waves are being sent through the filmmaking world – led by indies that aren’t satisfied with the status quo.

There’s a brand-new generation of filmmakers being brought up with this technology. They are learning the craft of storytelling and moviemaking right alongside learning how to leverage things like VR at the same time.

Maybe you are interested in making these kinds of films, too!

Check out those resources right now!