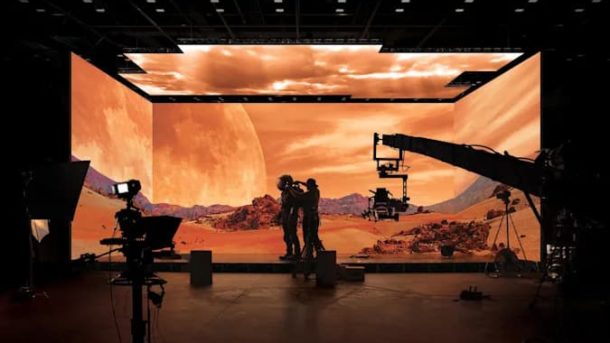 Gone are the days when independent filmmakers either had to deal with hastily-constructed sets or were forced to build their movies around available locations. With the introduction of LED walls and virtual production, the ability to create stunning movies on a budget is right there within the grasp of independent filmmakers. In fact, the technology has the ability to completely shake up the industry, and we are excited.

What Is An LED Wall?

Have you seen The Mandalorian on Disney Plus? Have you watched the latest iterations of Star Trek? In fact, have you seen any movies in the last few years that use weird and fanciful sets? Well, chances are that you have seen an LED wall at work…but you didn’t know it.

In the past, if you wanted to depict something on camera, you would have to find an area that looked like what you wanted or you would have to build a set. This is fantastic for the production companies with multi-million budgets. Not so much for the independent filmmaker.

An LED wall is essentially a giant screen that videos or images can be projected onto. For example, the vast landscapes that you see featured in The Mandalorian, or street scenes where a location shoot just isn’t possible in other movies.

LED walls, when properly used, can add depth to a scene. When used correctly, nobody will know an LED wall is being used.

Independent film productions can greatly benefit from the use of LED walls. When paired with a fantastic artistic team, LED walls can help to bring to life whatever is sitting in the mind of the filmmaker. We expect independent films to get even more stunning when LED wall technology takes off.

The best part is that LED wall technology isn’t really out of the reach of independent filmmakers. Because LED walls are likely to become a huge part of film production in the future, more and more filmmaking schools are dedicating resources to teaching virtual production. Other schools have developed centers where filmmakers have access to LED wall technology.

Looking For Funding For Your Independent Film?

LED walls may be accessible, but they are still expensive for the average independent filmmaker. If you have an idea for a movie that may rely on the use of a LED wall, why not enter one of The Film Fund’s contests? Our contests are open to all independent filmmakers. Pitch your film concept, and we may be able to make it a reality.